May on the west coast marks the return of the sunny Westerly winds and the end of the big winter swells. Prawning is a good addition to full day charters during the early weeks of May and Salmon and Halibut fishing will continue to become more consistent as the month progresses. We have already seen some great results as Chinook Salmon head to the Columbia and Fraser Rivers. Columbia River Chinook are forecast at 1.6 million fish, the highest numbers seen since the 1938. Fantastic news in Tofino as most of the run passes though our local waters between April and July. These fish often stop to feed on the Needlefish that are plentiful in the area leading to some terrific angling opportunities.

The halibut season is off to a solid start and we have seen a slight increase in the size limit to 133cm and 90cm respectively. At this time of year halibut can be jigged or trolled for at the same time as salmon. Lingcod and rock fish are also good options and make great table fare.

Summer forecasts. The Department of Fisheries and Oceans is expecting somewhere in the range of 22 million Sockeye to return to the Fraser River this summer and are anticipating that we will have an opening on the west coast. The decision to open this fishery is made in season meaning that we will not know when it will open for a while yet. Follow us on twitter @tfg_fishing for information on this opening as it becomes available.

There has been talk about a wild Coho opening in the offshore waters of Vancouver Island however at this point details are unclear. The interior Fraser River Coho are recovering and there is potential for DFO to raise the overall catch this season which could result in a sportfishing opening for Wild Coho in the offshore waters. This is currently in the hands of DFO. Update to come.

The emerging Albacore Tuna sportfishery has been a source of excitement on the west coast in recent years. Last season was our best Tuna year to date as the warm water was relatively close to Tofino and the Albacore were plentiful. We look forward to our 6th season of Vancouver Island 'Blue Water' fishing this August and September.

Join us on our fly in river trip for an adventure of a lifetime. A day on the river is a great addition to a Tofino fishing trip. Spend the day on an unlogged wilderness river in our comfortable raft or an inflatable personal kayak. Click to learn more.

To learn more or to book your Tofino Fishing Charter please give us a call or an email. 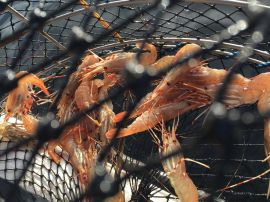 March - April 2022
Spring is a fantastic time to head to the west coast for a fishing adventure. Clayoquot Sound cook up a feast of fresh spot prawns and crab for dinner. 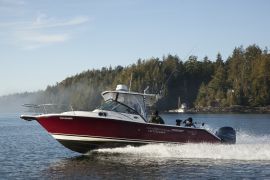 September 2021
Late summer offers visiting fishers a range of options on the West coast of Vancouver Island. September is a great month to cruse the protected inlets of Clayoquot Sound 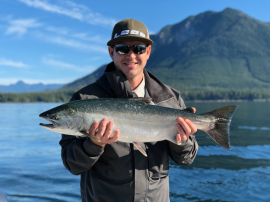 July - August 2020 Tofino fishing report
July and August represent peak season on the west coast of Vancouver Island, the halibut are up on the shelf, the salmon are moving through 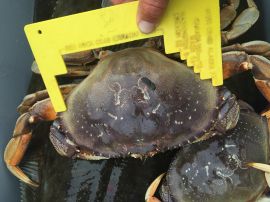 Spring 2020 Fishing in Tofino
Join us for a great day on the water this spring. Spot prawns, Crab, salmon, and bottom fish. Wildlife, scenery and calm water options await. 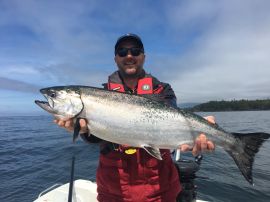 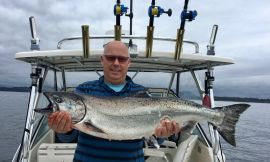 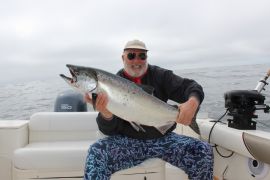 June - July 2019
As spring turns to summer in the North Eastern Pacific Ocean we begin to welcome back salmon to some of the most productive feeding grounds in the world's oceans. 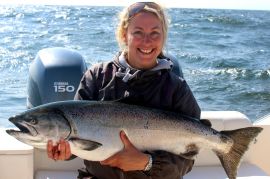 April - May 2019
As near-shore Westcoast Vancouver Island fisheries were shown to have zero impact on early run Fraser River Chinook by the Department of Fisheries and Oceans (DFO) modeling, Area 24 (Tofino - Clayoquot Sound) up to 1 nautical mile offshore will remain open.

February - April 2018
Salmon, Prawns, Crab and Steelhead, there is no need to wait for summer to get our and enjoy a day on the water. Catch a fresh seafood dinner, view the whales as they return to the north and maybe even hit the local hot springs for a soak. 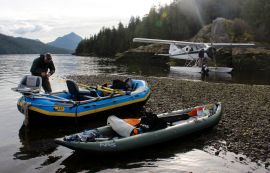 September - October 2017
September is arguably the best weather month of the year in the Tofino. The summer fog and westerly winds dissipate while the North Pacific winter low pressure system has yet to grip the region. 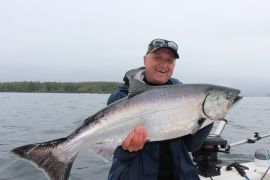 August 2017
The fog is in and so are the Chinook Salmon (Kings). Your best chance at a 'Tyee', a 30 pound plus Chinook, is almost certainly during the month of August. 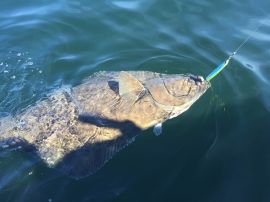 May - June 2017
Take advantage of the early summer season this year. Salmon begin running past Tofino in numbers during April, often pausing their migration to feed on the plentiful needle fish and herring on the banks of the 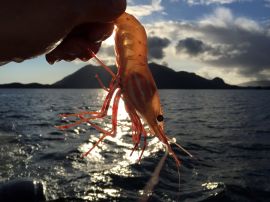 February - April 2017
Early Spring is a great time to get out on the water, get some fresh seafood for dinner, view the whales as they return to the north and maybe even hit the local hot springs for a soak. Winter 'Feeder' Chinook (Kings) mix with mature early run salmon presenting good options for the Tofino Angler. 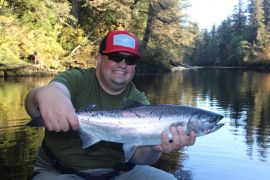 September Outlook 2016
Pending regulation changes will allow us near shore access to West Coast Vancouver Island Chinook traveling towards Robertson Creek and the Nitinat River for the first time in close to a decade. DFO stock scientists are estimating a run of WCVI Chinook of around 250,000 returning this August and September. Local areas such as Wilf Rock and Wya Point will be open to allow recreational anglers access to these sizable Chinook (King) salmon. 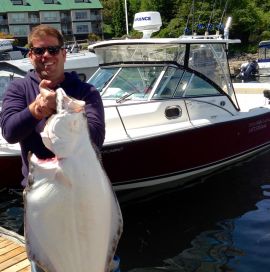 May - June 2016
Early summer can be a rewarding time to fish and enjoy the amenities Tofino has to offer prior to the rush July and August. 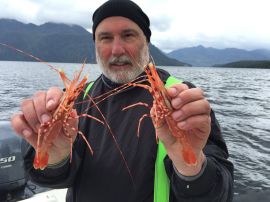 Winter 2016 Fishing Report
November through April is a great time to head out into the fiord inlets of Clayoquot Sound near Tofino and pull the prawn traps. Spot prawns are fantastic table fare.

June - July 2015
The prime time to fish Tofino is upon us once again. There is fun to be had this time of year no matter your experience or timeline, whether you choose to fish an afternoon or multiple days 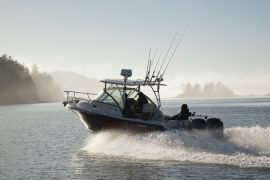 March - May 2015
If the large Herring spawns that we have been witnessing in Clayoquot Sound this spring are any indication of the season to come, spirits should be high. 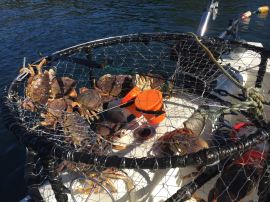 Sept - Nov 2014
Plenty of great fishing options exist during the late summer and fall in the Tofino area. Coho Salmon, Dungeness Crabs and Spot Prawns can be fished in the calm waters of Clayoquot Sound 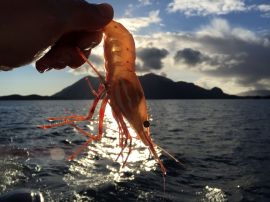 May/June 2014
May on the west coast marks the return of the sunny Westerly winds and the end of the big winter swells. Prawning is a good addition to full day charters

March/April 2014
Looks like we are in for another great spring in Tofino. Recent reports from the Columbia River forecast great Coho (Silver) returns and the best Chinook (King) Salmon run since 1938! 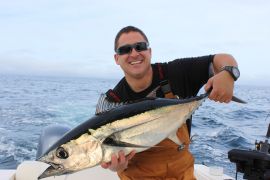 September/October 2013
Late summer offers anglers an array of fishing options to choose from. Fish Coho on the fly, target Halibut, Lingcod and Rockfish in the offshore waters, drift the river for Trout... 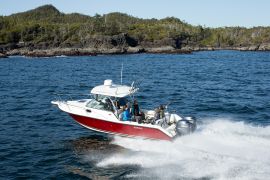 July 2013
Tofino Fish Guides looks forward to providing a fantastic fishing experience for you and your crew during the 2013 fishing season. We are excited to announce the arrival of the RED SKY 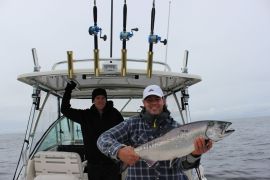 June 2013
Tofino Fish Guides looks forward to providing a fantastic fishing experience for you and your crew during the 2013 fishing season. 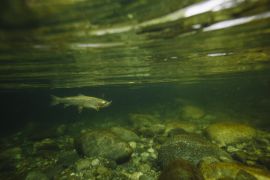 Spring Report
Tofino Fish Guides looks forward to providing a fantastic fishing experience for you and your crew during the 2013 fishing season.